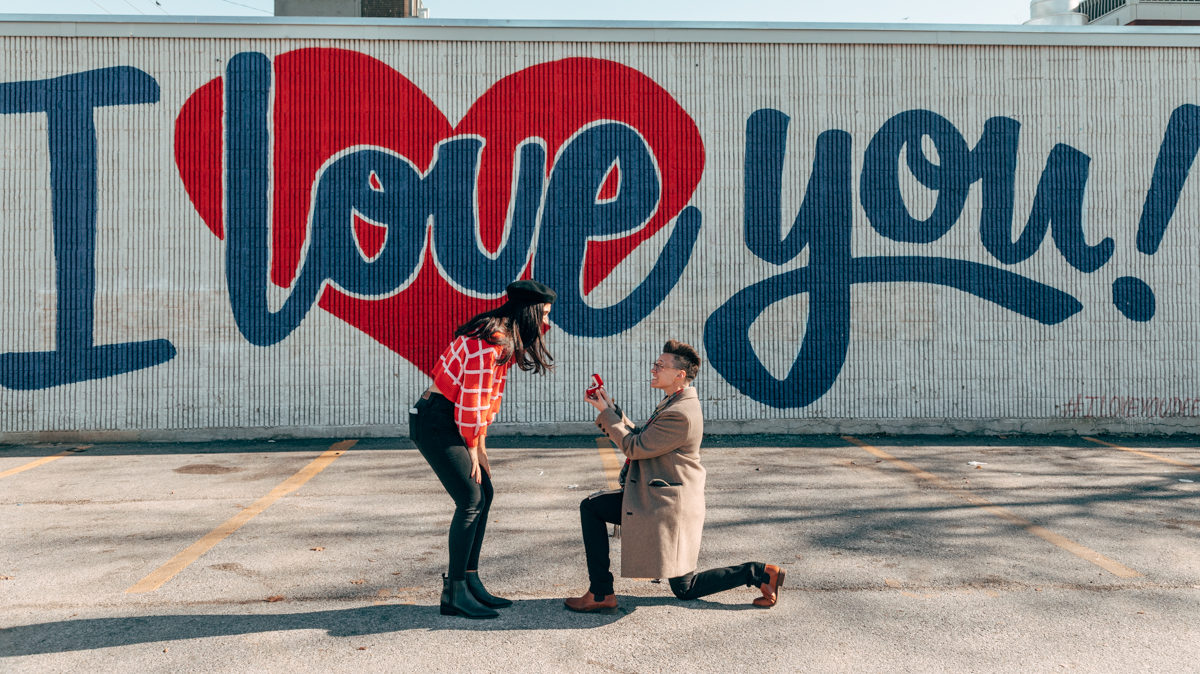 Posted at 12:30am in Dallas, LGBT, Proposals by imsteph 0 Comments
Share

Hi we are MK & Tash! We live in Boston, Massachusetts. We are both very passionate about the work we do. Tash works in diversity, equity, and inclusion consulting, and MK is a marketing exec in the tech startup space.

When we unplug for the day, we find ourselves doting on our fur baby, Kody. Living in Massachusetts, we are fortunate to hit the beach whenever we want. Even in the winter, hitting the beach on the weekend is one of our favorite activities! Like most folks who work from home, during weeknights, we make dinner, binge some of our favorite shows, and work out in our new “home gym” (aka the basement of our house). Recently we’re doing more daydreaming of where we will travel post-pandemic. Our mutual passion for traveling has been on hiatus and we can’t wait to get back to it when it’s safe.

What is the first thing you remember about the other when you first met?

We met at Round-Up Saloon, a country-western gay bar and dancehall in Dallas’ Gayborhood, Oak Lawn. Before we met, there were multiple occasions where we were supposed to be in the same place at the same time. That night was the perfect time for our paths to have crossed and neither of us would have had it any other way.

Tash: I walked into Round-Up that night, and the second I saw MK standing there, it was like tunnel vision. There was a dancefloor full of people two-stepping, but she was the ONLY thing I could see. She was the most attractive person I had ever seen! She was exuding confidence and cool with her blazer and great hair. I immediately got intel of who she was and if she was “on the market.” After finding out she was newer to Dallas and single, I made my way over. I quickly discovered that not only was she wildly good looking, she was also funny, smart, witty, and easy to talk to. The two of us ended up talking all night long, and I never wanted it to end. As the night was winding down, I asked her to go on a date with me, and at the end of the night, I told my friends I was pretty confident I had just met my soulmate.

MK: The night we met, I had only lived in Dallas for about five months. Going to a country-western gay bar was still a novelty for me, a transplant from Boston, and I spent most of the night awkwardly learning how to two-step. When Natasha walked up to our group of friends, the first thing I remember about her was this effervescent personality. When you meet Tash, you can’t help but immediately gravitate to her; she’s magnetic. Her inner beauty is only matched by her outer beauty and our first encounter had me stunned. Admittedly, I think I was intimidated. I was definitely nervous. But I don’t think the magnitude of meeting her hit me until later that night when my friend casually said, “How was it meeting your future wife?” Apparently, our chemistry was palpable from the start.

Where did the proposal go down and why that location?

The proposal happened in front of a mural that says “I love you!” in Deep Ellum near downtown Dallas. Candidly, this was not the original location I had in mind for our surprise proposal, but the original location just wasn’t going to cut it. After pulling an audible with Steph, we came to the conclusion that Deep Ellum was the spot. It had been the backdrop for all of our “firsts” as a couple. First kiss, first “I love you,” first home together … with all of those memories of “firsts” Deep Ellum had to be the place where we committed to a lifetime of more “firsts” together.

Picking the mural itself was more of a coincidence than anything. The day prior, I had taken some time to myself to walk around the old neighborhood. Deep Ellum has fantastic street art; it’s one of the reasons I moved there. Walking around the neighborhood, seeing the “I love you!” mural … it felt like I was home. Which is how I felt right away with Tash. She feels like home and that’s why I want to spend the rest of my life with her.

How did the proposal go down? Paint a pic of the scene for us.

Planning a remote proposal was actually easier than I expected. Weeks before we flew back to Dallas for the holidays, I looped in a few accomplices to help with my master plan. Behind the scenes, I asked our friends, Jenni and Steph to “ask” us to brunch the day of the proposal. As far as Tash knew, we were headed downtown to meet at 11 am. As planned, Jenni and Steph texted us about 10 minutes before our reservation saying they were “running late.”

With the extra time we had on our hands, I suggested we roam around our old neighborhood and see what had changed since we had moved. It was chilly that day so when I asked if she wanted to take a selfie in front of the “I love you!” mural, Tash begrudgingly said yes. As she was taking our selfie, I kept intentionally making weird faces claiming there was “something in my shoe.” When I bent down to fix my shoe, I grabbed the ring out of my pocket and waited for her to turn back around.

Even with a hair and nail appointments the day before, Tash was still blissfully unaware. Truthfully, the trickiest part of the whole ordeal was keeping the ring box hidden and in a safe spot!

Was there a memory from the proposal that sticks out more than others?

Tash: The moment I will never forget is the moment I turned around and saw MK. There she was, on one knee; I was in complete shock. When I saw her, it felt exactly as the movies depict. I could physically feel time stand still, a warmth ran through me, and it felt as if we were the only two people on earth in that moment. It was magic. The only word I could get out was yes!

MK: I’m a visualizer, so I had prepared every teeny tiny detail leading up to the proposal. But I did zero preparation for Tash’s reaction when the moment finally came. When she turned around, nothing could have prepared me for all of the emotion that ran across her face at once. One by one all of these genuine emotions kept pouring out surprise, joy, shock, love, glee … I was so swept up in the moment, I legitimately was at a loss for words and couldn’t bring myself to do the most important part – ask her to marry me.

Thankfully, the contextual clues helped and she kept saying “yes!” over and over. And yes, I have since officially asked her to be my wife.

What is one piece of advice that you would give to other couples planning a surprise proposal?

Don’t force it. There’s a natural flow in your rhythm together as a couple. When you force anything in a surprise proposal, that will inevitably disrupt your flow. You want this major milestone in your relationship to be nothing but good energy. Put that flow ahead of everything else and neither of you will be disappointed with the outcome.

If you could change one thing about it what would it be?

Tash would have had on a black undershirt to prevent her belly button from showing in so many pictures. A pretty minor thing in the grand scheme of things!

How was it planning a proposal during a pandemic? Did you feel safe?

It was important to me that the proposal happen in Dallas, but with travel being so risky, I didn’t want to rush it. Each other’s health and safety, and the health and safety of our families, has been our number one priority since we went into quarantine in March 2020. The decision to fly back to Dallas for Christmas was a tough one and we took every precaution while traveling and were hyper conscientious about staying in our “bubble.” For the proposal, the fact that we needed to be socially distant from others wasn’t much of a challenge. We always knew we wanted it to be just us focused completely on one another.

Top 3 things that you feel make a marriage/partnership last?

Communication – In good times and in bad, communication is at the core of how to build something that lasts. Communication doesn’t always have to be perfect, but as long as it happens there’s a path forward.
Empathy – Empathy for yourself and empathy for one another is right up there with communication. A partnership isn’t about someone loving you so hard you learn to love yourself. The more empathy you give yourself, the more open you’ll be to giving and receiving empathy from others.
Always Choose Each Other – Love doesn’t always just happen. It’s a choice. Making a commitment to another person means you’re always making the choice to love that person no matter what.

Why’d you choose Steph to document these memories for you?

Neither of us is a “staged” photograph kind of person, so it was important to partner with someone who could capture the raw emotion of the day. Looking at her work, you can see Steph has this keen ability to sense and capture the authenticity of a moment. It was also important for us to partner with someone in the queer community; someone who understands that the ability to marry who you love hasn’t always been an option in our lifetime. There’s a significance in how that lived-in experience documents these moments, one that clearly shows through Steph’s work.

Steph Goes to Dinah Shore 2015
Once upon a time...a week before Dinah Shore in Palm Springs, CA ...
BLACK TIE DINNER SPONSORS
It always makes my tiny heart the happiest when my worlds collide...
CASSIE + KAYLA UPDATE // LGBTQ+ MATERNITY
When did your engagement lifestyle session go down?We did o...
0
SHARES
ShareTweet